In ancient China, they used to follow the years by the moon’s pattern, this is why they don’t celebrate the new year on January 1st like most other countries. The holiday also celebrates zodiac signs. 2016 is the year of the monkey.

Lunar New Year comes with many traditions such as: walking around a cherry blossom tree for good luck, going to the temples to pray, dragons dancing and fireworks to scare off bad spirits, red envelopes of money you give to your loved ones, and large feasts in celebration. These traditions are not only celebrated in Asia, but some are celebrated in OKC as well. According to the U.S. Census, almost 2% of Oklahoma’s population identifies as Asian, which is about 75,000 people. Oklahoma City has a large Asian market called Super Cao Nguyen. There, they celebrate Lunar New Year with dancing dragon shows and fireworks. 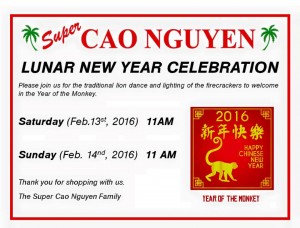 The RED Team wishes you all a lucky New Year! If you decide to participate in the Chinese New Year activities, share your pictures and your story with us!